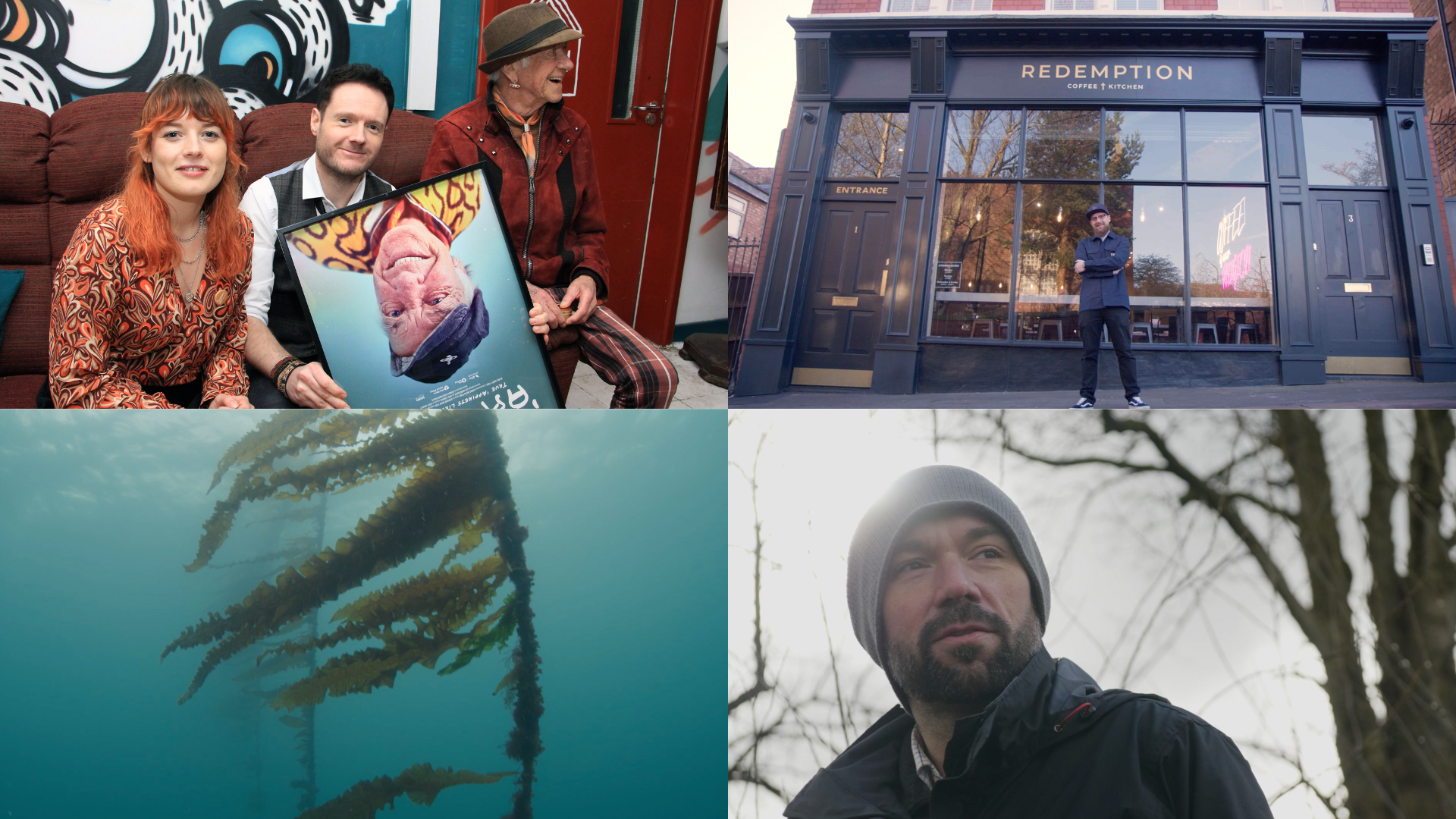 Now that we’re in June and the summer is just around the corner we’ve taken a moment to breathe and look back at the first 6 months of 2022 and celebrate some of our successful collaborations with our fantastic clients.

Without them, we simply wouldn’t have had the opportunity to travel across the UK filming all kinds of inspiring stories. From the depths of the ocean to the oldest social housing estate in the world the wealth of diversity in our projects this year has been life changing.

We started the year with our VIP screening of ‘Finding Appiness’ at the wonderfully unique Chapeltown Picture House and a packed out cinema audience.

‘Finding Appiness’ had been an 8 year long, emotional project for the film’s Director Natasha and was the result of a collaboration with the BFI’s Doc Society and Iambic Dream Film.

Allan, the subject of our film, reflects on his troubled past and his harmful coping mechanisms as he takes the audience through his emotional journey of self-discovery and self-acceptance.

We were pleased to support, through a raffle and donations, the Damien John Kelly House, an abstinence-based recovery Living Center for adult males that focus on belonging, connection and purpose through arts, sport and culture.

We raised just over £200 for the organisation which went towards supporting those on their own journey through recovery.

Alan’s story is a ray of light for people, not just in recovery, but in everyday life. Something needed now more than ever.

“A short film with a lot of character. This brief glimpse into an intriguing soul paints a colourful picture of life in recovery, highlighting that “Finding Appiness” is no black and white affair. Ultimately inspiring. Well worth a watch.”

During February we set out across the UK exploring the wonderful, and relatively unknown, benefits of seaweed and seaweed farming.

Seaweed is quickly becoming a popular, sustainable and healthy source of food. In the Uk alone the industry is set for a huge boom in the coming years which could bring with it plenty of benefits to our climate.

‘Ocean Greens’ was funded by Quorn and supported by Northern based PlanetShine who provided us with valuable guidance and the creative flexibility to tell this story in an authentic way.

Quorn commissioned a slate of 3 films, all exploring the future food needs of our planet. It was a hugely important campaign, each film contributing valuable insight into the ongoing conversation around the future of our species.

‘Ocean Greens’ is readily available to stream on the WaterBear Network, completely for free.

In March we were back out into the environment once again as we helped our friends at Ribble Rivers Trust celebrate the end of their 7 year Ribble Life Together project.

Ribble Rivers Trust have been a close collaborator for a number of years and so we were delighted to create a short documentary to commemorate Ribble Life Together’s positive impact on the Ribble catchment.

Ribble Life Together has created 30 woodlands, delivered 15 wetland and 14 fish pass projects, and engaged thousands of people in a variety of community projects and activities.

Though the end of Ribble Life Together brings an end to all the filming we’ve been doing with the Ribble Rivers Trust over the years this will certainly not mark the end of our long lasting relationship.

There’s many ideas brewing and I’m sure it won’t be long before the wellies are back on and we’re out filming again in the Ribble Valley.

We didn’t have to travel very far in April as we helped Historic England capture the community lead restoration work taking place in the town of Tyldesley. We caught up with local resident Ian at the midpoint of a 4 year project to bring the town’s high street back to life.

Tyldesley’s scheme is the only community-led scheme in the North West and is proud to have the local community and young people at the scheme’s heart.

Thanks to match funding by Historic England and the Heritage Action Zone scheme Tyldesely’s highstreet will be transformed over the course of the project. Northern Heart Films had been chosen specifically to tell this trailblazing story.

Our film will be a lasting legacy for the Tyldsley HAZ scheme and will demonstrate what can be achieved when a passionate community comes together to make positive change in their local area.

“Northern Heart Films have been incredible to work with. They really captured the personable stories and the quality of the finished film is exceptional”

We had a great trip to the capital in May for the premiere of our latest collaboration ‘Becontree: 100 Years On’ produced with The Mirror and Barking & Dagenham College.

Our short film about the historic Becontree estate in Barking & Dagenham opened at the Romford Film Festival and Scott was invited up on stage to discuss the production in a packed out cinema.

This was a unique project as it was filmed during the height of the pandemic so we collaborated with the local students at Barking & Dagenham College who helped us secure and interview the residents of this famous estate.

Inspired by the short film ‘Talking Heads’ this collaboration has helped our film maintain an authentic voice and be a true representation of Becontree and those that call the estate their home.

To the next half of the year…

There’s certainly no time to rest as we’ve got plenty of exciting projects lined up for the next 6 months. Including a behind the scenes look at the amazing theatre production ‘Bunker of Zion’.

Northern Heart Films will always be here for those that want to work with us on projects that can and do inspire positive change in our society.